Device Shadow (or Thing Shadow) is a unique feature of AWS IoT Platform. It can help you design robust IoT Solutions, even for the devices with constrained and intermittent Network connectivity. Let’s explore more about shadows in this article.

A Device Shadow is a persistent virtual ‘shadow’ of a Thing defined in AWS IoT Registry. Basically, it’s a JSON State Document that is used to store and retrieve current state information for a thing. You can interact with a Device Shadow using MQTT Topics or REST API calls. The main advantage of Shadows is that you can interact with it, regardless of whether the thing is connected to the Internet or not.

The following diagram shows a very simple interaction between the Things / Apps and the AWS IoT Thing Shadow (For accessing Shadows on AWS IoT, your devices/apps must be authenticated and should have correct Security Policy in place. To keep the diagram simple Authentication and Authorization blocks are not shown here) – 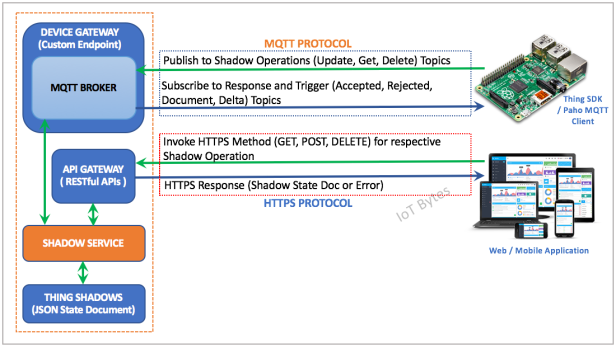 Get topic retrieves the latest state stored in the thing shadow (for example, during start-up of a device to retrieve configuration and the last state of operation). This method returns the full JSON document, including metadata.

Delete topic delete a thing shadow, including all of its content. This removes the JSON document from the data store. You can’t restore a thing shadow you deleted, but you can create a new thing shadow with the same name.

For more details refer to the following link –

AWS IoT platform allows you to access Device Shadows using REST APIs too. The REST APIs can pass through AWS API Gateway and can perform operations like Shadow Update (or Create), Get, and Delete. Let’s explore it in detail here –

First of all, you need to create a new User from AWS IAM Module to get hold of “Access Key” and “Secret Key”. This IoT API user must have one of following permissions –

Use HTTP GET method without any payload to fetch Device Shadow. The following diagram shows a simple get shadow HTTP Request. (More details at Link).

Use HTTP DELETE method without any payload to delete a Device Shadow. The following diagram shows a simple delete shadow HTTP Request. (More details at Link).

You can publish following JSON message to MQTT Topic “$aws/things/THING_NAME/shadow/update” to update the Device Shadow with new desired state of “Light1” i.e. “OFF” –

On successful Shadow update, If the previous “reported” state is “ON”; AWS IoT will publish Desired Sate to Delta Topic “$aws/things/THING_NAME/shadow/update/delta”.

The device that is subscribed to Delta Topic, will perform the requested operation (Turn On the light in this case), and report back the new State to AWS IoT Device Shadow, using Update Topic “$aws/things/THING_NAME/shadow/update” with following JSON message –

Now you understand the basics of AWS IoT Thing or Device Shadows. In the next article, we shall see Shadows in action with Raspberry Pi.